A couple of weeks ago my boyfriend, Mike (who was somewhat hurt I left his name out of the Orchid Show post, oops sorry!) and I went to the Yoko Ono and Friends to Japan with Love benefit show at Le Possion Rouge.  It was such a fun night of amazing performers with the friends list including Antony, Patti Smith, Tony Shananhan, Cibo Matto and Lou Reed.

When we were at the bar waiting to get a drink I stumbled upon a bowl full of buttons.  As I grabbed a handful to start reading I realized that they had the phrase “Imagine Peace” in all different languages written on them.  Being of Mexican decent I was obviously very happy to come across the button with the phrase in Spanish, but I was equally excited that I was able to recognize other languages.

These other two buttons had a special meaning to me because my dear friend Helena is Korean and one of my oldest, closest friends, Kim’s husband is from Tibet.

I just thought the whole thing was very beautiful and a really great way to remind people that “Imagine Peace” is an international phrase worth spreading. 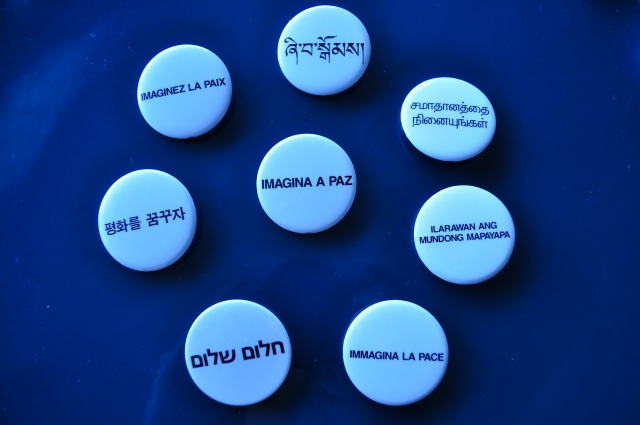 As excited I was to see Yoko Ono for the first time live, I would be lying if I didn’t tell you that it was Patti Smith who I really went to see that night.  I have been a fan of Ms. Smith for many years and always find her music, style and message to be an inspiration.  So I’ll end this post with a video of Patti, Tony Shananhan and their band performing “People Got the Power” at the To Japan with Love benefit.  Hope this brings a little bit of peace to your day!

4 Responses to Imagina a Paz